Quality at Furukawa Battery applies not only to the products themselves, but to every stage, every category and every level of our corporate activities, from research and development to manufacturing, service and administrative operations. We continually iterate on a PDCA-based management cycle that is factually based to maintain and improve the quality of our products, services and business operations. Moreover, we recognize that building trust from society by guaranteeing quality in a comprehensive fashion is essential to achieving the management principles and goals of Furukawa Battery.

Furukawa Battery was established when it was spun off from Furukawa Electric Co., Ltd. in 1950. Recognizing our responsibility as a manufacturing business, we have taken quality control seriously since our founding. In 1952 we obtained Japanese Industrial Standards certification for automotive storage batteries, and won the 2nd Deming Prize for the results of our quality control implementation. Later, from 1989 we incorporated the FB Production System inspired by the Toyota Production System, and promoted various improvement activities including PI*1 , SI*2 , and RI*3 on a unified companywide basis. In 1994, Furukawa Battery established the “3 BEST FB” slogan and thoroughly implemented the approach of quality supremacy.

As part of driving overseas expansion, we also sought to obtain the international ISO9001 certification for quality management systems (QMS). In 1995, the certification was obtained by Furukawa Battery’s nickelmetal-hydride battery division, which was the highest priority for overseas expansion at the time, and the company made internal and external commitments to operate a QMS. This was a forward-thinking move for a Japanese company. Certification was later expanded to other divisions, and in 2000 Furukawa Battery obtained company-wide certification, including its nationwide branch offices.

After obtaining ISO9001 certification for quality management systems (QMS) in our nickel and hydrogen battery operating divisions in 1995, in 1999 the Iwaki and Imaichi Plants each obtained ISO14001 certification for environmental management systems (EMS). In February 2017, the certification was extended to the head office and nationwide brand offices, with the certification now covering the entire company to realize higher-level activities. Furukawa Battery originally operated its ISO9001 QMS and ISO14001 EMS separately. In April 2016, however, we established a policy of unifying its environmental and quality initiatives with operations and actively working to not only improve customer satisfaction but also preserve the global environment and build a sustainable society. Accordingly, we built and began operating a Business Management System that integrates the QMS and EMS. Furukawa Battery has added environmental aspects to the focus on quality it has embraced since its founding, and applies these initiatives to the business procedures of each division and organization based on the Business Management System. Moving forward, we will continue to cultivate an awareness of the PDCA cycle in all our business operations including back-office functions, and build upon ongoing and proactive improvements through reciprocal checks by way of internal audits, management reviews and other activities. 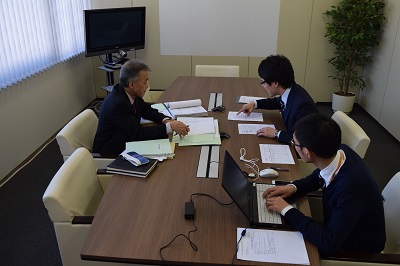